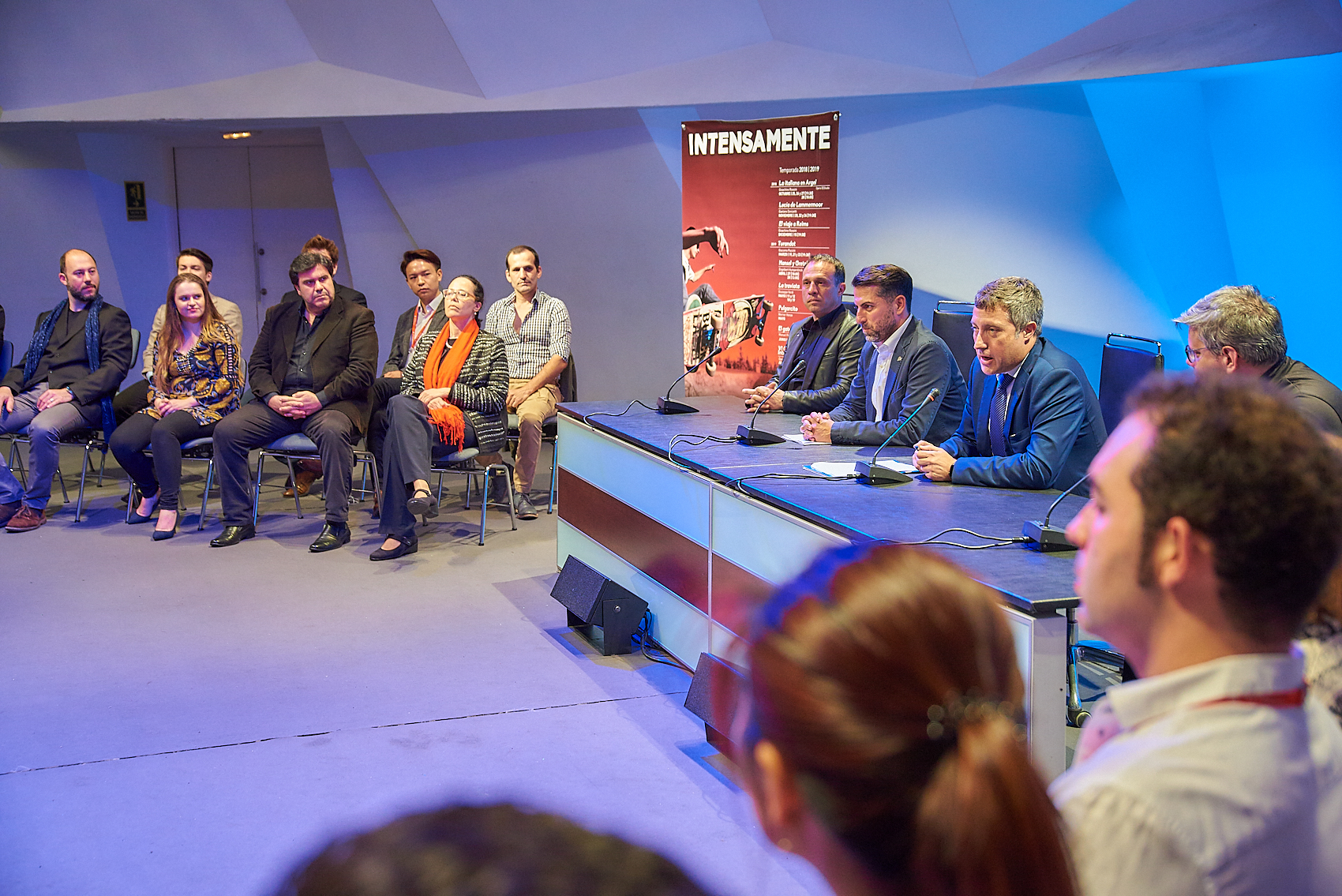 Ópera de Tenerife presented on Friday, the 15th the production of Turandot, to be put on next week at Sala Sinfónica in Auditorio de Tenerife. Performances are taking place on Tuesday, the 19th, Thursday, 21st and Saturday, the 23rd at 7:30 pm. This opera by Giacomo Puccini is one of his most-widely performed titles. Set in the Far East, this posthumous work by Puccini includes arias like ‘Nessun dorma’, ‘In questa reggia’ or ‘Signore, ascolta’, which have reached beyond the stage and are now part of popular culture.

José Luis Rivero said that “we have the best cast possible to perform this opera, which is nearly sold out in all three performances”. “We have exceptional guest artists, who often perform with us, in addition to Auditorio de Tenerife team, who do an excellent job”. “We’re proud of this title, we were looking forward to putting it on”, he stated, and revealed that “this title left a lasting impression when it was premiered, which we’ll bring back with this staging in Tenerife”.

Alejandro Abrante explained that “since opera seasons are held in Tenerife, from 1965 to the present, Turandot has been put on three times: in 1991, 2007 and now, 2019”. The last two were staged at Auditorio de Tenerife during the Ópera de Tenerife season and were directed by maestro Frigeni. “Turandot is a very complicated opera, as there are 80 people, just in the choir, in addition to the orchestra plus the cast, so it makes up quite a large group”, Abrante admitted.

Giuseppe Frigeni thanked Ópera de Tenerife for placing their trust on him and revealed that “although I did this title here in 2007, there will be some differences, for instance, in lighting but also in the performance”. The maestro said that “the quality of the artists and their predisposition has led to characters being adapted to their singing characteristics. “They were open to the director’s conceptualization, which is something that is not very common, so it’ll show in the performance”, and highlighted “the readiness and generosity of Auditorio de Tenerife’s technical team, which is not very usual in today’s show business”.

For this Turandot production, Giuseppe Frigeni has put together not very loud stage and visual elements so that they allow the music to resound rather than illustrate what it evokes: transparencies and effects seen against the light, a fluid sliding of planes and dimensions, dynamic contrasts, rituals and a somewhat engrossed atmosphere. Although he does take into account the oriental nature of the context, he has gone for abstraction, avoiding an excess of exotic elements or Chinese ornaments.

Maestro Giampaolo Bisanti, who works at Ópera de Tenerife for the first time, stressed the mutual respect and good vibes with maestro Frigeni, “which is quite unusual between a stage director and a musical director in an opera”. “I wish to personally thank Ópera de Tenerife because they have made me feel at home, and again, I’ve experienced this quite unusual situation, not only with my theatre colleagues but in the city too”.

Bisanti admitted that there has been a bidirectional relationship with Orquesta Sinfónica de Tenerife, which he thinks is “professional and disciplined”. “Tenerife people will have the chance to see a top-quality product”, he promised.

Costumes are by designer Amélie Haas. Her main inspiration is in the sober and pure Eastern designs, especially those from Japan; they agree with the intentions and principles of the aesthetics and dramatic direction, and the formal approach of the stage design so that her costumes go on stage in simple and pure abstract shapes, which are not didactic.

Inspired in a Persian poem, the libretto in Italian is by Giuseppe Adami and Renato Simoni, and the music is by composer Giacomo Puccini [Lucca 1858 - Brussels 1924]. It tells the story of the cruel princess Turandot, who will only marry the suitor who deciphers the three riddles she suggests. If the answer is wrong, the candidate dies.

The opera was premiered at Teatro alla Scala in Milan on 25 April 1926 with director Arturo Toscanini. Since the composer did not finish the score, it was his pupil, Franco Alfano, who completed it.

There are several anecdotes about the premiere. Perhaps the best remembered is when the part for choir reached ‘Liù...Bontà!’,  conductor Toscanini, to pay homage to his friend of many years, put down his baton and turning to the audience said: ‘This is where the opera ends, because the maestro died at this point’, and ended the performance without including Alfano’s composition, which was played the following day.