FAM turns into a dance platform in its ninth year 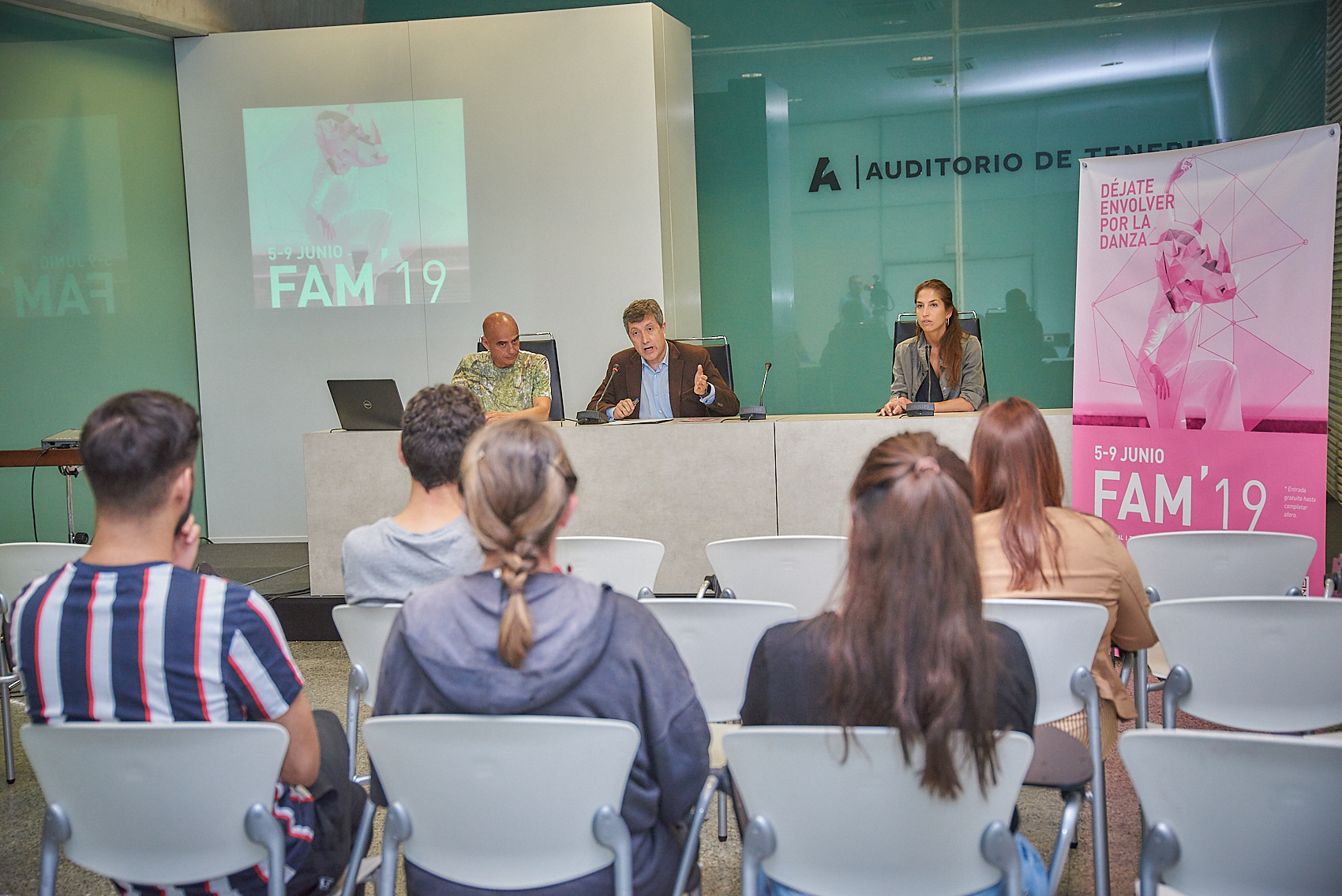 In its ninth year, the Festival de las Artes del Movimiento (FAM) becomes a platform for dance offering activities for professionals and some twenty shows from 5 to 9 June, all of which are free. The details of the new FAM concept were revealed at a press conference on Wednesday, 22 May, by the Island Director for Culture, José Luis Rivero; the president of the Asociación Artistas del Movimiento PiedeBase, Roberto Torres; and Tenerife dancer Paula Quintana, who is premiering a show at FAM.

José Luis Rivero explained that “the concept changes because it is more intense now and we generate a meeting space for companies, audience and international programmers who are coming from the US, Italy, Portugal, Bulgaria, Germany or Colombia”. In Rivero’s opinion, the original spirit of FAM is kept, that is, “bringing contemporary dance close to audiences”.

Auditorio de Tenerife, Teatro Guimerá, Teatro Leal, Paraninfo of La Laguna University and the streets of La Laguna are the venues for this renewed FAM, which includes the attendance of some thirty local, national and international programmers. “All the performances are free of charge; we do this in order to bring dance close to people without the price being a barrier”, Rivero stated.

FAM takes place in just five days: on Wednesday, 5th and Thursday, 6th June the different shows will be on at Teatro Leal, pedestrian streets and ULL’s Paraninfo, while on Friday the venue is Teatro Guimerá in Santa Cruz. These three first days will also concentrate the activities for professionals: work meetings, talks, debates and meetings between programmers and creators.

In contrast, on Saturday and Sunday Auditorio de Tenerife will be host to eleven shows which take place in a row in five different zones of the building: Sala Sinfónica, Sala de Cámara, Sala Castillo, hall and exterior. Technically, this production involves the largest lighting set up in the 15 years of activity of Auditorio de Tenerife.

The FAM programme “showcases the dance taking place in our country”, the island director said. Several shows will be premiering at FAM, especially those related to projects which have benefited from the Cabildo’s aid to performing arts productions with, Rivero pointed out, “the dance proposals getting the first places”.

Roberto Torres said the Cabildo de Tenerife “encouraged the setting up of the association; and we’ve actually noticed a change since: we, the artists and the island institution are working together now”. The choreographer also said that “the aid for production have dignified the whole professional chain that takes part in a dance show, not only the dancer”.

One of the premieres is Las alegrías by Paula Quintana, who will open FAM on Wednesday, 5 June at 7:30 pm in Teatro Leal. This will be the only event on the first day. “To me it’s very important to feel we’re backed, Canarian artists can now compete under the same conditions as companies from Spain or from abroad. This makes us feel more hopeful and gives us strength to go on working”, the Tenerife dancer said. She counts on a considerable number of artists from different disciplines, as for example writer Roy Galán.

On Friday, 7 June Paloma Hurtado is bringing her Ephimera outside Teatro Guimerá at 7:00 pm. She will be followed by the debut of Daniel Morales as a company with La muerte de Venus at 8:00 pm. Carlota Mantecón, dancer and choreographer is also performing for the first time her Esto no es una prueba de sonido at 11:30 am on Saturday, 8 June at Auditorio’s Sala Castillo.

The project Danza en Comunidad, the outreach area of Auditorio’s Tenerife Danza, (coordinated by Laura Marrero), is presenting three pieces which have been made with three different communities. Two of them will be performed for the first time: Piedras and Viento, made with the Proyecto de Mujeres de Añaza Emprendedoras-Fundación el Buen Samaritano and Asociación de Padres Orobal, respectively. While Adosados, created from the Martes Danzando en Comunidad workshops, was premiered at Mueca 2019. All three can be seen on Saturday, 8 June at 4:30 pm at Sala Castillo in Auditorio de Tenerife.

Also, Auditorio de Tenerife dance company, Lava, directed by the winner of the Premio Nacional de Danza Daniel Abreu, is also presenting two of their repertoire pieces at FAM, one of which is a premiere. The first one, Bending the walls, by Fernando Hernando Magadan, is on at 8:00 pm on Saturday, 8 June at Sala Sinfónica in Auditorio de Tenerife; Paloma Hurtado’s 15º al oeste, will be performed on 9 June outside the Auditorio at 7:45 pm.

The company of Lava artistic director, Daniel Abreu, is also in the FAM programme: La desnudez will be the closing performance on Sunday 9 June 8:30 pm. The piece, which is interpreted by the Tenerife dancer with Dácil González and musician Hugo Portas, received three Max awards for Best Dance Show, Best Male Dancer and Best Choreography in 2018.

In addition to Canarian artists, FAM also features three performances from the national circuit A Cielo Abierto: iU an Mi by Lali Ayguadé company on Thursday, 6 June at  6:30 pm in Teatro Leal; Habrá que ponerse cachas, by Proyecto Colectivo of Maylis Arrabit, Xabier Madina and Ebi Soria at 6:30 pm outside Leal; Anónimas Raíces by Premoh’s Cru at 7:00 pm in Calle Viana; Canvas of bodies. Opus nº1 by Taiat Dansa at 7:30 pm in the square outside Parroquia de Santo Domingo Guzmán. It ends at 8:30 pm on Thursday at Paraninfo of La Laguna University with dancer and choreographer Manuel Liñán’s Baile de autor.

Friday, 7 June start with professional activities to then go on with Set of Sets, by Guy Nader and Maria Campos, at Teatro Guimerá at 12:30 pm. Apart from the general public, school children from the island have also been invited. In the afternoon, we can see the two Canarian pieces in the festival: Ephimera and La muerte de Venus.

After Mantecón’s premiere, on Saturday 8 June, Antonio Ruz’s Presente will be on at 12:30 pm in Sala Sinfónica. Once Danza en Comunidad is finished, Ehiza by Héctor Plaza and Agnes Sales will be performed at 5:30 pm in the hall. At 6:30 pm Janet Novás is putting on her Mercedes y yo at Sala de Cámara. The last performance on Saturday is by Lava and takes place at 8:00 pm in Sala Sinfónica.

Diego Sinniger’s Liov is the first show on Sunday, 9 June, starting at 11:30 am outside Auditorio de Tenerife. At 12:30 pm it is time for The Lamb, by Kor’sia in Sala Sinfónica. La gramática de los mamíferos, by María del Mar Suárez, is taking over Sala de Cámara at 6:30 pm. Lava and Compañía Daniel Abreu will provide the special ending of this 9th festival.

FAM is a Cabildo de Tenerife project under the Tenerife 2030 strategy. It has the collaboration of Red Nacional de Teatros [Theatre National Netwrok], through the Danza a Escena scheme and the support of Ministry of Culture’s INAEM, the Acieloabierto network and the city councils of Santa Cruz and La Laguna. With the passing of years, the Festival de las Artes del Movimiento has renewed its EFFE stamp (Europe for Festivals, Festivals for Europe), a quality distinction that is granted to festivals that have an artistic mission, are committed to the local community and have a strategic vision at European level.