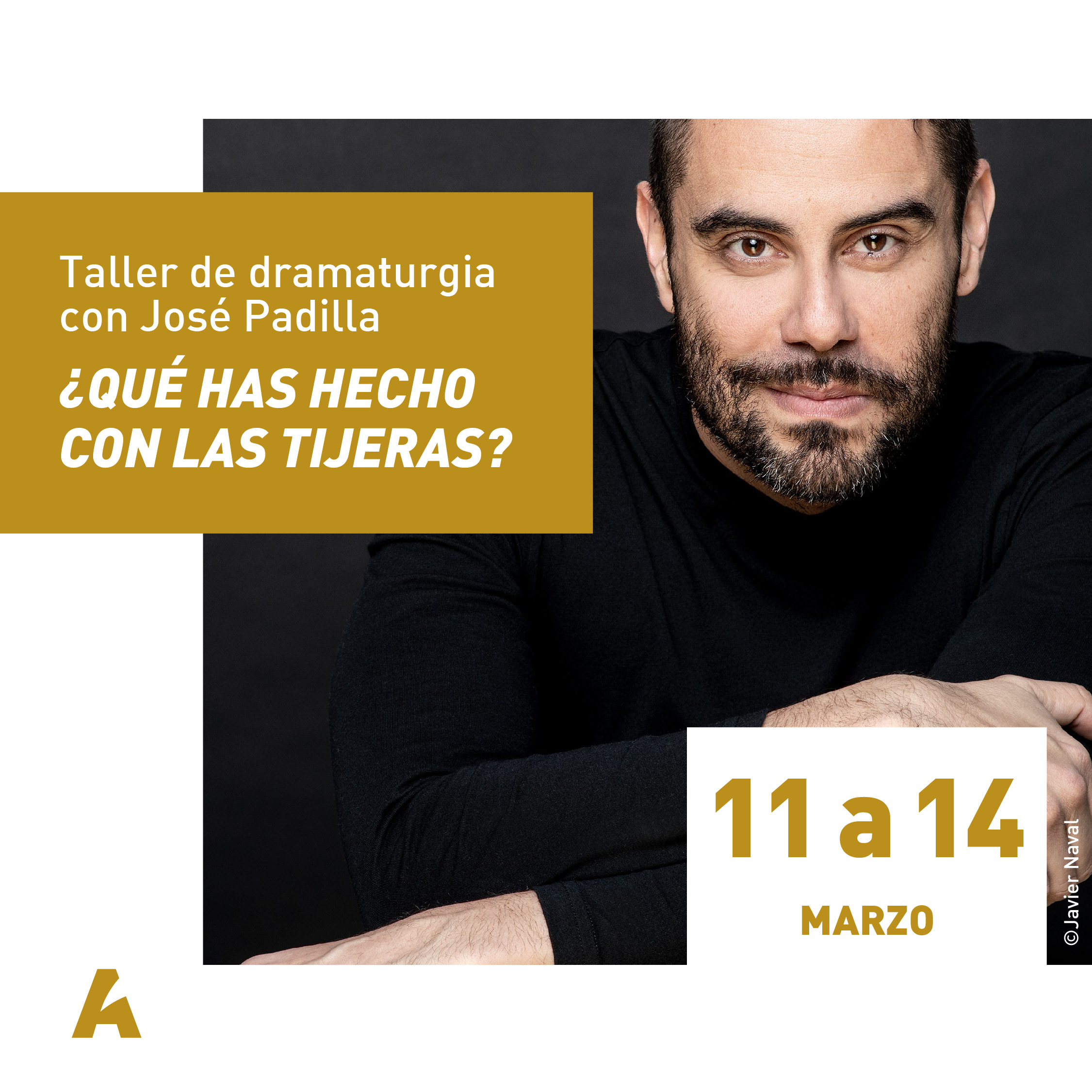 Workshop title:What have you done with the scissors?

Limited number of places. Sending the registration form does not guarantee your enrolment. To confirm the place, an email will be sent with the procedure to follow.

Recommended for: professional and amateur playwrights.

Selection criteria: having written, published, self-published or staged a play, having attended workshops and courses in playwriting. All of it will be considered an asset.

When we approach the task of writing a dramatic text, we often have to face a first stumbling block: the topic. It is almost unavoidable having to face a heavy burden which is rather linked to the image that we want to show the world of ourselves as creators, than what we really want to tell. Corruption, illness, disenchantment, war, crisis... in many cases, all those topics only give an early coup de grâce to what could be our creation. These topics could appear in our work (in one sense or another, they could even not to be there), but interpreting them as a primary cause could place us in such an unmanageable situation that we end up losing our way.

Harold Pinter said that almost every play starts with phrases or words that seemingly come out of nowhere, followed by an image, and followed by himself. Let's take the example of ‘The Homecoming’ and what this play tells us: The first line of ‘The Homecoming’ is "What have you done with the scissors?" He didn't have no further information. Someone was obviously looking for a pair of scissors and was demanding their whereabouts of someone else he suspected had probably stolen them. But I somehow knew that the person addressed didn’t give a damn about the scissors or about the questioner either, for that matter.  I found myself compelled to pursue the matter. This happened visually, a very slow fade, through shadow into light."

Max.- What have you done with the scissors?

I said I'm looking for the scissors. What have you done with them?

Did you hear me? I want to cut something out of the paper.

Max.- Not that paper. I haven't even read that paper. I'm talking about last Sunday's paper I was just having a look at it in the kitchen.

Do you hear what I'm saying? I'm talking to you! Where's the scissors?

He found Max's story following this beginning and chasing images. Max is a retired butcher that lives in a suburb of London with two of his three children, Lenny and Joey, together with his brother Sam. Years later, Max's third son, Ted, unexpectedly returns home with his partner, Ruth. With this context and from a seemingly inconsequential phrase ("What have you done with the scissors?") he wrote a tragedy of absurdity with a tremendously solid dramatic structure. Maybe if Pinter had approached his work thinking "I'm going to write a play that targets social conventions; I will criticise the society in which I live", he would probably not have been able to write a single letter.

It is much more practical to search through imagination than to impose a topic.

During this workshop we will explore the author's imagination, which ultimately generates situations and dramatic texts. This will be our starting point to find a genuine story to tell.

José Padilla has a degree from the Spanish Royal School of Dramatic Arts in Textual Interpretation and has continued his training with professionals like Declan Donnellan, Simon Stephens, Wadji Mouawad, José Ramón Fernández, Alfredo Sanzol and Vicente Fuentes. Among other recognitions, he won the prize Max Award for Performing Arts for his work Dados, the Almagro Off Award for Perra Vida - an adaptation of the work El casamiento engañoso, written by Cervantes; the prize Ojo Crítico de Teatro awarded by Radio Nacional de España or the prize Premio Réplica a Mejor Autoría Canaria for his work Porno Casero.  Among other shows, he conducts Haz clic aquí  for Centro Dramático Nacional, La isla púpura and Las crónicas of Peter Sanchidrián, both for Kamikaze Producciones; he currently writes and directs a trilogy for the company Ventrículo Veloz: Papel; Por la boca and Dados. As a classic’s versioner, he has focused his career on Shakespeare and Cervantes. He has also written versions from English originals of Otello, Henry VIII, Love's Labour's Lost, Measure for Measure or Merchants of Babel, a free version of The Merchant of Venice for the theatre Teatro de la Abadía of Madrid. His works have been played in prestigious theatres like The Moscow Art Theatre, the Globe Theatre of London or La Comedie Française of Paris. He has taught in workshops for Centro Dramático Nacional, Instituto Cervantes, Sala Beckett (Barcelona) or Compañía Nacional de Teatro Clásico.