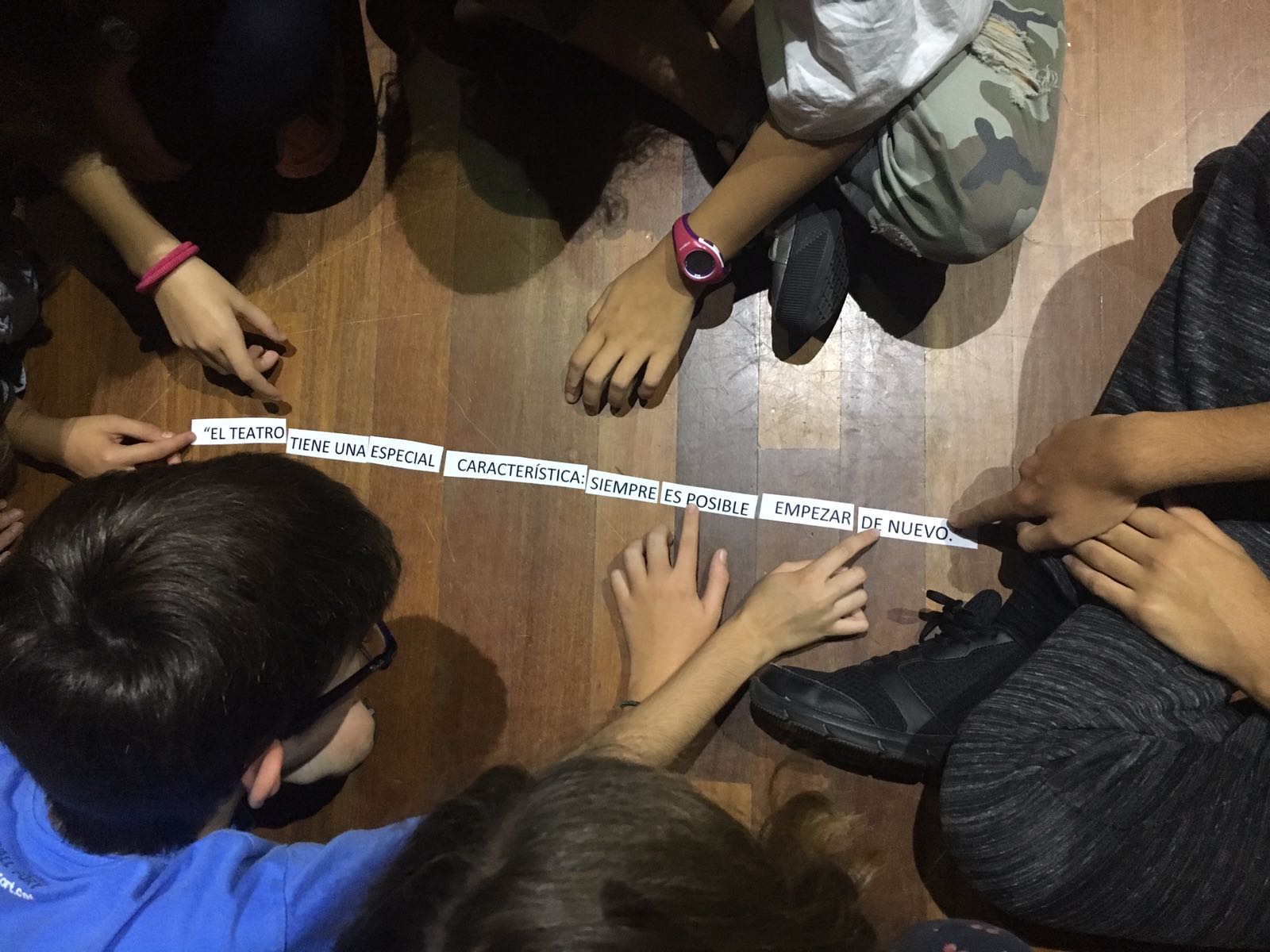 On Friday, 27 March 2020 we celebrate the World Theatre Day with a message by Pakistani playwright Shahid Nadeem, “Theatre as a Shrine”.

The students of the Escuelas de Teatro [Drama Schools] congratulate you on the World Theatre Day with some videos you can enjoy here, sorted out by municipalities:

The Government of the Canary Islands has made a video where many theatre professionals of the Canaries read this year’s message, including Auditorio de Tenerife’s artistic director, José Luis Rivero. You can watch it here.

Theatre as a Shrine

It is a great honour for me to write the World Theatre Day 2020 Message. It is a most humbling feeling but it is also an exciting thought that Pakistani theatre and Pakistan itself, has been recognized by the ITI, the most influential and representative world theatre body of our times. This honour is also a tribute to Madeeha Gauhar1, theatre icon and Ajoka Theatre2 founder, also my life partner, who passed away two years ago. The Ajoka team has come a long, hard way, literally from Street to Theatre. But that is the story of many a theatre group, I am sure. It is never easy or smooth sailing. It is always a struggle.

I come from a predominantly Muslim country, which has seen several military dictatorships, the horrible onslaught of religious extremists and three wars with neighbouring India, with whom we share thousands of years of history and heritage. Today we still live in fear of a full-blown war with our twin-brother neighbour, even a nuclear war, as both countries now have nuclear weapons.

We sometimes say in jest; “bad times are a good time for theatre”. There is no dearth of challenges to be faced, contradictions to be exposed and status quo to be subverted. My theatre group, Ajoka and I have been walking this tightrope for over 36 years now. It has indeed been a tight rope: to maintain the balance between entertainment and education, between searching and learning from the past and preparing for the future, between creative free expression and adventurous showdowns with authority, between socially critical and financially viable theatre, between reaching out to the masses and being avant-garde. One may say that a theatre-maker has to be a conjurer, a magician.

In Pakistan, a clear division has existed between the Sacred and the Profane. For the Profane, there is no room for religious questioning, while for the Sacred, there is no possibility of open debate or new ideas. In fact, the conservative establishment consider art and culture out of bounds for its “sacred games”. So, the playing field for the performing artists has been like a hurdles race. They have to first prove their credentials as good Muslims and compliant citizens and also try to establish that dance, music and theatre are “allowed” in Islam. A large number of observant Muslims have hence been reluctant to embrace the performing arts even though the elements of dance, music and theatre are embedded in their daily lives. And then we stumbled on a sub-culture which had the potential to bring the Sacred and Profane on the same stage.

During the military rule in Pakistan in the 1980s, Ajoka was launched by a group of young artists who challenged the dictatorship through a socially and politically bold theatre of dissent. They found that their feelings, their anger, their anguish, were so amazingly expressed by a Sufi bard3, who lived some 300 years ago. This was the great Sufi poet Bulleh Shah4. Ajoka found it could make politically explosive statements through his poetry, challenging corrupt political authority and bigoted religious establishment. The authorities could ban or banish us but not a revered and popular Sufi poet like Bulleh Shah. We discovered that his life was as dramatic and radical as his poetry, which had earned him fatwas and banishment in his lifetime. I then wrote, “Bulha”, a play about Bulleh Shah’s life and struggle. Bulha, as he is lovingly referred to by the masses across South Asia, was from a tradition of Punjabi Sufi poets who fearlessly challenged the authority of the emperors and the clerical demagogues, through their poetry and practice. They wrote in the language of the people and about the aspirations of the masses. In music and dance, they found the vehicles to achieve a direct association between Man and God, by-passing with disdain, the exploitative religious middlemen. They defied gender and class divides and looked at the planet with wonder, as a manifestation of the Almighty. The Arts Council of Lahore rejected the script on the grounds that it was not a play but merely a biography. However, when the play was performed at an alternative venue, the Goethe Institute, the audience saw, understood and appreciated the symbolism in the life and poetry of the people’s poet. They could fully identify with his life and times and see the parallels with their own lives and times.

A new kind of theatre was born that day in 2001. Devotional Qawwali music5, Sufi Dhamal dancing6 and inspirational poetry recitation, even the meditative Zikir chanting7, became parts of the play. A group of Sikhs8, who were in town to attend a Punjabi conference and had popped in to see the play, invaded the stage at the end, hugging and kissing the actors and crying. They were sharing the stage for the first time with Muslim Punjabis after the Partition of India in 19479, which resulted in the division of Punjab on communal lines. Bulleh Shah had been as dear to them as he was to Muslim Punjabis; for Sufis transcend religious or communal divides.

This memorable premiere was followed by Bulleh Shah’s Indian odyssey. Starting with a trail-blazing tour of the Indian part of the Punjab, “Bulha” was performed in the length and breadth of India, even in times of gravest tensions between the two countries and in places where the audience did not know a single word of Punjabi but loved every moment of the play. While the doors for political dialogue and diplomacy were being closed one by one, the doors of theatre halls and the hearts of the Indian public remained wide open. During the Ajoka tour of Indian Punjab in 2004, after a very warmly received performance before a rural audience of thousands, an old man came to the actor playing the role of the great Sufi. The old man was accompanied by a young boy. “My grandson is very unwell; would you please blow a blessing upon him.” The actor was taken aback and said, “Babaji10, I am not Bulleh Shah, I am just an actor playing this role.” The old man started crying and said, “Please bless my grandson, I know he will recover, if you do.” We suggested to the actor to grant the old man his wish. The actor blew a blessing upon the young boy. The old man was satisfied. Before leaving, he said these words: “Son, you are not an actor, you are a reincarnation of Bulleh Shah, his Avatar11.” Suddenly a whole new concept of acting, of theatre, dawned upon us, where the actor becomes the reincarnation of the character he or she is portraying.

In the 18 years of touring with “Bulha”, we have noticed a similar response from an apparently uninitiated audience, for whom the performance is not just an entertaining or an intellectually stimulating experience but a soul-stirring spiritual encounter. In fact the actor playing the role of Bulleh Shah’s Sufi Master, was so profoundly influenced by the experience that he himself became a Sufi poet and has since published two collections of poems. The performers involved in the production have shared that when the performance starts, they feel that the spirit of Bulleh Shah is among them and the stage seems to have been elevated to a higher plane. An Indian scholar, when writing about the play, gave it the title: “When Theatre Becomes a Shrine”.

I am a secular person and my interest in Sufism is mainly cultural. I am more interested in the performative and artistic aspects of Punjabi Sufi poets but my audience, who may not be extremists or bigoted but may hold sincere religious beliefs. Exploring stories such as that of Bulleh Shah, and there are so many in all cultures, can become a bridge between us, the theatre-makers and an unacquainted but enthusiastic audience. Together we can discover the spiritual dimensions of theatre and build bridges between the past and present, leading to a future which is the destiny of all communities; believers and non-believers, actors and old men, and their grandsons.

The reason why I am sharing the story of Bulleh Shah and our exploration of a kind of Sufi Theatre is that while performing on stage, we sometimes get carried away by our philosophy of theatre, our role as harbingers of social change and in doing so, leave a large section of the masses behind. In our engagement with the challenges of the present, we deprive ourselves of the possibilities of a deeply moving spiritual experience which theatre can provide. In today’s world where bigotry, hate and violence is on the rise once again, nations seem to be pitted against nations, believers are fighting other believers and communities are spewing hatred against other communities… and in the meanwhile children die of malnutrition, mothers during childbirth due to the lack of timely medical care and ideologies of hate flourish. Our planet is plunging deeper and deeper into a climatic and climactic catastrophe and one can hear the hoof-beats of the horses of the Four Horsemen of the Apocalypse12. We need to replenish our spiritual strength; we need to fight apathy, lethargy, pessimism, greed and disregard for the world we live in, the Planet we live on. Theatre has a role, a noble role, in energizing and mobilizing humanity to lift itself from its descent into the abyss. It can uplift the stage, the performance space, into something sacred. In South Asia, the artists touch with reverence the floor of the stage before stepping onto it, an ancient tradition when the spiritual and the cultural were intertwined. It is time to regain that symbiotic relationship between the artist and the audience, the past and the future. Theatre-making can be a sacred act and the actors indeed can become the avatars of the roles they play. Theatre elevates the art of acting to a higher spiritual plane. Theatre has the potential of becoming a shrine and the shrine a performance space.

World Theatre Day was initiated in 1961 by the International Theatre Institute ITI. It is celebrated annually on the 27th March by ITI Centres and the international theatre community. Various national and international theatre events are organized to mark this occasion. One of the most important of these is the circulation of the World Theatre Day Message through which at the invitation of ITI, a figure of world stature shares his or her reflections on the theme of Theatre and a Culture of Peace. The first World Theatre Day Message was written by Jean Cocteau in 1962.Ever since, each year on the 27th March (date of the opening of the 1962 "Theatre of Nations" season in Paris), World Theatre Day has been celebrated in many and varied ways by ITI Centres - of which there are now more than 90 throughout the world. Moreover theatres, theatre professionals, theatre lovers, theatre universities, academies and schools celebrate it as well.

Each year an outstanding figure in theatre or a person outstanding in heart and spirit from another field is invited to share his or her reflections on theatre and international harmony. What is known as the International Message is translated into more than 50 languages, read for tens of thousands of spectators before performances in theatres throughout the world, and printed in hundreds of daily newspapers. Colleagues in the audio-visual field lend a fraternal hand, with more than a hundred radio and television stations transmitting the Message to listeners in all corners of the five continents.