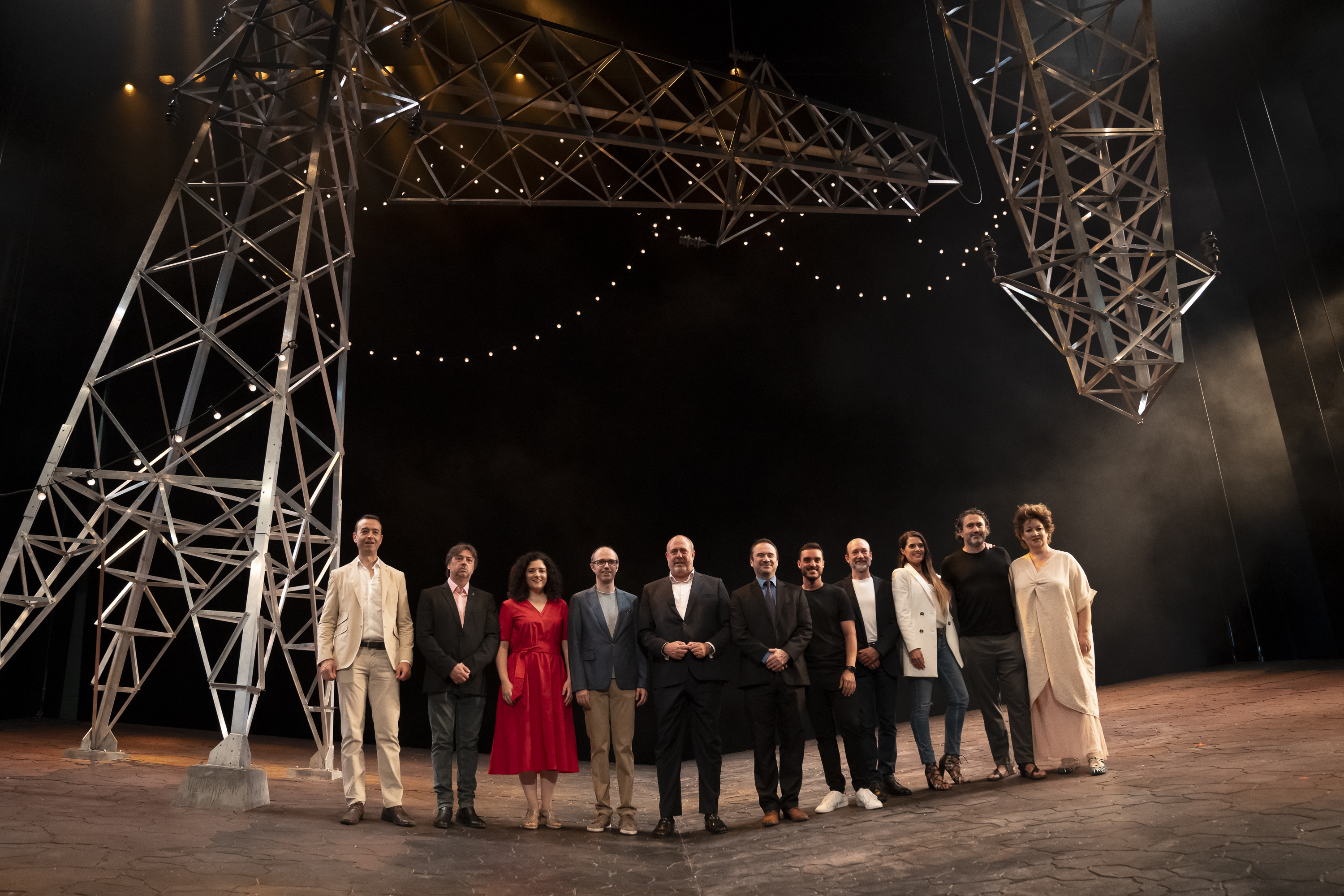 The Auditorio de Tenerife opens the opera season 2022-2023 with Fuenteovejuna, based on the Spanish Golden Age classic by Lope de Vega. The performances take place in the Symphony Hall on the 18, 20 and 22 of October at 7:30 p.m. The tickets and passes for five titles of the season are still available. The details of the production were announced today [Monday 10th] by the island’s minister for Culture of Tenerife Council, Enrique Arriaga, together with the opera’s composer, Jorge Muñiz, the musical director, Santiago Serrate, and the director of stage revivals, Raúl Vázquez.

Enrique Arriaga recalled that “not long ago the composer Jorge Muñiz received a commission from the Opera of Oviedo Foundation. He adapted the opera Fuenteovejuna to celebrate the 400th anniversary of the work by Lope de Vega with one of the masterpieces of the Spanish Golden Age”. The world premiere of this adaptation with a libretto by Javier Almuzara took place in Asturias in 2018. “The Auditorium of Tenerife will be the second venue to offer the performance of this contemporary work with a very topical subject” highlighted Arriaga.

Arriaga acknowledged that “we are delighted to open the season of the Opera of Tenerife with this contemporary proposal which is in line with the aim established last year to reach everyone: opera experts, young people and those not so seasoned in opera”. The Tenerife Symphony Orchestra and the solo singers are joined by the choir ‘Coro Titular Ópera de Tenerife-Intermezzo’ and the extras. “It promises great success on the stage” announced the minister.

Winner of the European Grand Prize for Young Composers, the composer Jorge Muñiz explained that “programming new work in opera seasons is what we contemporary creators aspire to do in order to communicate today”. “Fuenteovejuna is by Lope de Vega, but its language has been updated by the librettist Javier Almuzara and I hope that it directly talks to the audience”. As for the music, Muñiz highlighted that “they are going to hear hip hop, funk, merengue and even a bolero during the work, but he also talked about tradition, and they are going to recognise characters who are shaped like in Mozart operas in a modest tribute”.

Santiago Serrate will lead the Tenerife Symphony Orchestra as musical director. “It is the first time that I have conducted this orchestra which I have known for a long time. I must say that it is a luxury and we are going to head into this premiere with great naturalness” explained the maestro. For Serrate, “the Opera of Tenerife is a star that really dazzles the global scene. What makes it different is its programming: opening the season with a contemporary opera from four years ago says a lot about the Auditorium”. “The All for one, Fuenteovejuna in this work is very topical because in the pandemic we saw that together we could beat it and the same will happen with the war” explained the maestro. He stated that people would hear live music “that will touch their hearts”. “Our job is not only entertainment, culture educates, it shapes people, and this opera poses very relevant questions” stated the musician.

The stage direction is by Miguel del Arco, winner of the 2017 National Theatre Award, and, for the shows in Tenerife, Raúl Vázquez will be in charge of stage revival direction. “I feel that the Opera of Tenerife is like my second home and I am delighted to return on this occasion with a stage direction created by Del Arco that is very demanding, both in terms of staging and music” announced Vázquez, who added that “I hope the public will not miss the chance to see this work in an opera format because it will not fail to make an impression and all of our work and effort will be seen in this total spectacle”.

The stage design was by Paco Azorín, while the costumes were devised by Sandra Espinosa. The lighting direction which can be enjoyed in the Symphony Hall is by Juanjo Llorens. As for the cast, the soprano María Miró will be Laurencia, the daughter of the mayor of Fuenteovejuna. Her sweetheart, Frondoso, will be played by the tenor Antonio Gandía. The bass Felipe Bou will play the municipal ruler, while the baritone Damián del Castillo will be transformed into the ruthless commander Fernán Goméz. The bass-baritone Fernando Latorre will provide the voice of his assistant.

The roles of the villagers Mengo, Pascuala and Jacinta will be performed by the tenor David Astorga, the soprano Isabella Gaudí and the mezzo-soprano Marina Pardo, respectively. The tenor Juan Noval-Moro will play the magistrate who will issue a judgement on the town. The voices of the soloists will be joined by another thirty members of the Tenerife-Intermezzo Resident Choir.

This opera, in three acts, shows some questions posed by Lope de Vega that have remained valid four centuries later: the united force of a social mass under the repression of the established power and corruption. With this work, Muñiz ratifies his commitment to social issues.

The tickets are available on the website www.auditoriodetenerife.com, at the auditorium's box office or by dialling the phone number 902 317 327 from Monday to Friday from 10:00 a.m. to 05:00 p.m., Saturdays from 10:00 a.m. to 02:00 p.m. Check the special discounts for students, unemployed, large families and holders of the TEN+JUB and TEN+DIS cards issued by the Tenerife Island Council as well as the special price of €5 for the audience under 30 years of age.

The subscription for Opera de Tenerife is available until October 17th, including five of the seven performances of the season: (Fuenteovejuna, Un ballo in maschera, Nancy Fabiola y sus invitados (Nancy Fabiola and her guests), DER ZWERG (THE DWARF) and Tannhäuser). The prices of the Opera Club pass start at 100 Euros. There is also a discounted pass for members of large families (-30%) and the offer continues for young people under the age of 30, who can enjoy the five products -all of them, except the chamber and family operas- for 20 Euros, that is to say, four Euros per performance.